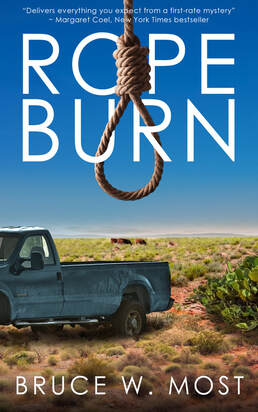 ​
​Escaping a troubled past, former Baltimore detective Nick DeNunzio hires on as a Wyoming stock detective to stop a brutal string of modern-day cattle thefts. Chasing rustlers ought to be a lark for a city slicker cop. But when people start turning up dead, Nick realizes it’s not just cows being led to slaughter.

To catch the rustlers and stop the murders before he is the next victim, Nick must solve a seven-year-old crime, confront his own dark past . . . and become a cattle rustler himself.

“It’s time you paid up for your sins, Jack,” said the man.

Jack Hooker tipped his tan cowboy hat toward the big Wyoming sky and laughed. The pathetic excuse of a man standing a dozen feet away musta been watchin’ them money-suckin’, Bible-thumpin’ TV preachers. Now them is folks who need to pay up for their sins.

“You plannin’ on doin’ the collectin’?” Hooker taunted.

The rancher lazily scanned the sea of sagebrush and buffalo grass. The man had come alone in his pickup. As far as Hooker could see—and from where he stood, mendin’ barbed wire fence, he could see a damn sight in every direction—there weren’t another soul around. Just endless, treeless rangeland, low rolling hills, and scattered Herefords shimmering under ripples of heat. A place where a man breathed aloneness. That’s what he loved about this land—the pull of its solitude, endless space where the world lets you be. A place that tests a man, and where most men, like this mamma’s boy standing nervously in front of him, come up wantin’.

Hooker sensed the fear in the man’s voice.

“You all think you got cause, don’t ya?” he said. “You maybe more’n most of ’em. Truth is, some folks just don’t deserve what they don’t have.”

“You were warned. It’s time somebody put a stop to you.”

Weeks before, half a dozen men had come to his house, under cover of darkness, threatenin’ him. Empty threats by empty men. He laughed at ’em and chased ’em off with a shotgun.

“A bunchya couldn’t scare me before. What makes you think you’re up to doin’ it by yourself?”

Hooker scanned the landscape again, this time more cautiously. Tough to imagine this man had the guts to come alone. More likely they sent him as a decoy, in broad daylight, when they thought he’d be least suspecting. They knew if they came again, like some kinda posse, he’d snatch his huntin’ rifle from his pickup and use ’em for target practice.

Hooker glanced at the man’s pickup twenty yards away. Extended cab. Room enough to hide two, three men. Or maybe they was lying in the truck bed under the tarp. Maybe their plan was for this decoy to get a jump on him so’s they could rush him before he could get to his rifle.

“How exactly this gonna happen?” Hooker baited, one eye warily on the pickup.

The man tried to put on a convincing show, clenching his gloved fists, face filled with blood, neck veins corded. But Hooker didn’t see no gun or knife or anything else on him that could serve as a weapon. His fists alone wouldn’t be enough. Jack Hooker might be seventy-seven years old, but he was a leather-tough seventy-seven.

“Well, come on then.” Hooker didn’t even bother to brace himself. Just stood there slumped shouldered, like the man threatening him wasn’t worth payin’ no mind.

The coward didn’t move. Figures, thought Hooker. He could see the fear, the hesitancy in the man’s eyes. He’d come full of fury, but no plan . . . no balls. Like the rest of ’em in this county. No balls to do what needs to be done.

That ain’t never troubled him.

“Knew you wasn’t man ’nough.” Hooker turned back to his work. Enough of these threats, as hot and empty as a westerly wind. It was gettin’ on in the afternoon and he still had fence to fix. A man don’t survive out here less he works to the bone. And unlike most ranchers he actually liked fixin’ fence. Liked replacing downed posts and rusty broke wire, stretching shiny new wire fiddle-string tight. Liked the rhythm of the work, the isolation, the satisfaction of fencing off what was his and letting others know where they wasn’t welcome.

He was reaching for a roll of barbed wire when he sensed movement. Sensed it too late. Saw a heavy yellow metal bar swinging against the sulfurous Wyoming sky. The fence stretcher he’d used to string countless miles of fence.