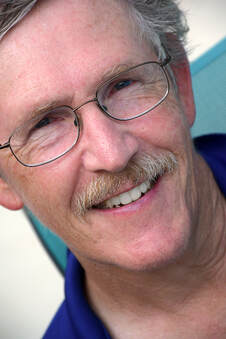 Photo by John Kopp
​I like to kill people.

​I don’t know why. I grew up in Iowa, for god sakes. I led a quiet career as a freelance writer that saw my words in national publications, including hundreds of articles on financial planning. I'm happily married and have two children. And I don’t possess a violent impulse in my body. Well, not often, anyway.

But murder on the page . . . that’s another story. Murder is about as elemental as it gets in human nature—and as dramatic as it gets on the written page. No wonder crime fiction is so popular. Even Dostoevsky wrote crime fiction.
Why I write, How I Write
Excerpted from an interview by horror writer Doug Hawk


Why I write murder mysteries

The question of why do you write what you do is a cousin to the question every published writer gets—where do you get your ideas? But the question goes deeper than that. Ideas are everywhere. I have dozens of ideas for novels. But what resonates with a writer to invest hundreds of hours or more (my wife would say too many more) in a particular book idea?

For me, it’s usually something personal: a theme, a character, a setting. No Time for Murder (set for publication in 2020 and which concerns a harried writer with no time to investigate the death of a close friend) is an perfect example. In fact, the title came to me first, right out of my life, before any plot or character. Probably while running some errand. Why are so many of us so caught up in our rush-rush world doing busybody tasks while we shortchange what’s truly important in our lives?

Rope Burn grew out of my freelance magazine writing days when I published two articles about cattle rustling. In addition, I have in-laws who live on a ranch. I’ve been to many a branding in Wyoming, though I confess horses and I don’t mix well. What ultimately drew me in, however, was the story of a man trying to escape his dark past and ultimately forced to confront it.

As for a mystery built around a famous crime photographer (a book in the planning stages), I’ve long been an hobbyist photographer. And I’m intrigued with exploring the idea of where photographers cross the line from being disinterested observers of the human condition to involving themselves in the people and events they photograph.

How my work differs from others of its genre

It’s challenging to differ that much from others in the mystery genre, considering the long-held conventions and tropes that rule the field. But I would say in general I’m drawn to reluctant sleuths. Many protagonists in mystery novels are working law enforcement or private detectives whose job is to solve the crime. The amateur sleuth (think Agatha Christie’s Miss Marple) is typically either a busybody who sniffs into murders for no apparent reason—which frankly drives me nuts (again, think of Miss Marple)—or they must investigate out of necessity because they are under suspicion by the police, have a relative or friend under suspicion, or are at risk of becoming the next victim.

I prefer characters who come reluctantly to solving crimes, often more out of psychological or emotional motives than anything else. I also like fish-out-of-water protagonists. For example, although Nick DeNunzio in Rope Burn is a former Baltimore detective, he’s out of his element hunting down cattle rustlers in Wyoming. My protagonist in No Time for Murder is a former investigative reporter and true crime book writer, but he’s hardly qualified to investigate his friend’s death. Nonetheless, he’s compelled to investigate out of guilt for failing to be there for his troubled friend when he was alive. My 1949 Denver cop is streetwise, but he’s forced out of his element because his investigation takes him to the city’s world of the wealthy and social elite.

Once I’ve become so enamored with a story that I must write it, I begin brainstorming characters, plot, murders, motives, and suspects. If substantive research is necessary, I’ll jump into that as well. Murder on the Tracks, the Ruby Dark books, and Rope Burn needed research because they involved worlds with which I was not intimately familiar. Many authors don’t like research, but I love it. It invariably provides me plot and character inspiration. The challenge is not to get buried under it.

Writers tend to be either pantsers or plotters. Pantsers start writing with only sketchy ideas, whereas plotters develop extensive outlines, sometimes brainstorming every scene in the book before they tackle page one. I do some plotting and character development in advance, but inevitably I get impatient to dive into the first draft. From there, come drafts two, three, four, or however many are necessary. Along the way I unearth my real story. My favorite example is from my second published Ruby Dark mystery, Missing Bonds. I vaguely knew my killer before I started, but it wasn’t satisfying. As I was writing a scene 100 pages into my first draft, a minor character suddenly walked onstage for the first time (yes, it happens). I knew instantly that person was my killer and why, and I tossed out my original villain.

As for my writing schedule, I try to write six afternoons each week whenever the rest of life doesn't overwhelm me.